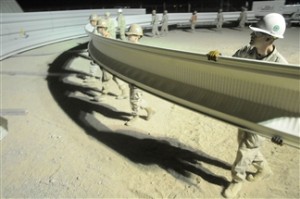 Two foreign invasions for a total of three decades of war have largely taken their toll on Afghanistan infrastructure – there isn’t much left.  And what remains is only partially usable, according to a 2008 report by the Government Accountability Office (GAO). Building Afghanistan’s infrastructure has been a centerpiece of US efforts, for both security reasons and to encourage economic development.  However, what was there before the U.S. stepped in?

The GAO estimates that in late 2001 about 16% of Afghanistan’s roads were paved, compared to 80% in neighboring countries.  Approximately 31%, or $16 billion, in US aid to Afghanistan since 2001 has gone towards economic, social, and political development efforts, according to the Congressional Research Service.  As much as 25% of USAID’s Afghanistan budget goes specifically to road construction, to which the DOD has also contributed over $500 million through the Commander’s Emergency Response Program, a flexible fund for small reconstruction projects.

There are some positive indications in the quest to improve Afghanistan’s infrastructure – for example, as of September 2008, USAID had built or repaired over 1,600 miles of road. However, the challenges are far more numerous.  Lack of transparency and insufficient interagency cooperation have plagued US efforts. Questions have been raised in particular about poor of oversight for the CERP program, which was originally intended for small projects, but has been increasingly used to fund large-scale projects.

Some construction projects are even counterproductive. For example, the Great Wall of Kandahar.  This infrastructure project may alleniate the local population more than protect it, thus ultimately setting back the war effort and wasting taxpayer dollars.

The waste will continue after construction is completed, because many of these projects are unsustainable. GAO estimates that 90% of Afghanistan’s budget comes from foreign aid, meaning that the US and other countries will be picking up the tab for building and maintaining Afghanistan’s infrastructure for quite some time.

2 Responses to The Black Hole of Afghanistan Infrastructure Projects