Navigating the Afghanistan Peace Process: It’s Going to be a Bumpy Road 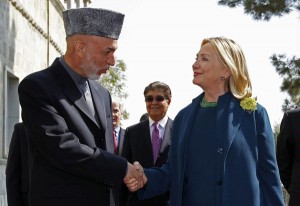 “I don’t know any peace process that hasn’t been a bumpy process,” Secretary of State Hillary Clinton said during her trip to the Middle East last week. Her words proved timely. US-Afghanistan relations encountered a bump not two days later, when President Karzai said that Afghanistan would back Pakistan in the event of a US-Pakistan war.

During her visit to Kabul, Sec. Clinton (never known for pulling punches when it comes to Pakistan) sent a “clear, unequivocal message to the government and the people of Pakistan that they must be part of the solution. And that means ridding their country of terrorists who kill their own people and who cross the border to kill in Afghanistan.”

Karzai agreed, which is why his comments Sunday came as something of a surprise. “Perplexing,” some called it; Others a “rhetorical flourish.” However, the US State Department says it’s irrelevant: “It is not an issue, because it [a war] is not going to happen.”

The explanation for Karzai’s remarks is simple, according to Afghan officials: they were misinterpreted. Karzai was referring to Pakistan’s accepting Afghani refugees, and indicating that if there were ever a need, Afghanistan would return the favor.

It’s hardly surprising that Karzai would distance himself from the statement. In addition to the reaction he got from the West, his remarks must have raised a few eyebrows in New Delhi. India and Afghanistan recently announced a strategic framework for cooperation on a number of issues – security, but also trade, education and social ties.

The episode was a perfect example of the complexities surrounding multi-state peace negotiations in the Af-Pak region. Afghanistan is trying to reach out to both its neighbors – which is essential if we’re to achieve peace and stability in the region – while maintaining its relationship with the US. In this case, Karzai’s attempt to show solidarity with Pakistan backfired with Western allies.

The takeaway for the US is that the flare-up of this past weekend is typical of the peace process. As Afghanistan and Pakistan step up to the negotiating table, and take on responsibilities for regional security, we may not like everything that comes out of the process. In fact, we will have to “get realistic” about our own goals, accepting that there will be bumps along the way, and that we may not always be driving.