The Kill Team Scandal: A Symbol of Fundamental Rot in the War in Afghanistan 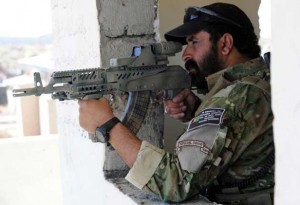 Rolling Stone has the deeply troubling backstory on the US Army infantry platoon implicated in the murder of unarmed civilians in Kandahar province last year. The “Kill Team” story made headlines around the world after Der Spiegel published leaked photos of the accused soldiers posing with the bodies of dead Afghans.

Western officials hope that the swift prosecution of the accused soldiers will show the Afghan public that justice will be served and that the U.S. military is doing its part to combat impunity in Afghanistan. However, as was noted on this blog last week, these actions might not be enough to convince the Afghan public of the United States’ good intentions. Despite fears voiced by both NATO officials and members of the Karzai administration, massive protests have not erupted in the wake of the “Kill Team” photos’ publication. The relative quiet of Afghanistan’s streets points toward a tragic loss of faith in the foreign troops risking their lives to provide the Afghan public with security.

Sadly, this loss of faith hasn’t occurred in a vacuum. Take the case of Afghan National Police Commander Azizullah in Paktika province.

From The Independent (with follow-up reports here and here):

“An Afghan warlord backed by US special forces faces persistent allegations that he launched a two-year spate of violence involving burglary, rape and murder of civilians, desecration of mosques and mutilations of corpses. Yet, despite repeated warnings about the atrocities Commander Azizullah is alleged to have committed, he has remained on the payroll of the US military as an ‘Afghan security guard,’ a select band of mercenaries described by some as ‘the most effective fighting formation in Afghanistan.”

It bears repeating: “…on the payroll of the US military…”

While Congress is paralyzed over $30 billion in proposed spending cuts, the $14 trillion dollar national debt groans under the weight of the $119 billion spent annually on the war in Afghanistan, and almost 14 million Americans are unemployed, an alleged war criminal has a steady paycheck courtesy of American taxpayers.

The allegations against Azizullah were first raised in a UN report provided to NATO’s deputy commander US Lieutenant-General David Rodriguez in February of 2010 and include information provided by religious leaders, tribal elders, villagers, contractors, and Western and Afghan officials as well as members of a range of tribes from different areas in Paktika. However, a cursory investigation by NATO concluded that the allegations were unsubstantiated and the matter was dropped. This appears to be the unfortunate norm for coalition investigations as Erica Gaston, a human rights lawyer with the Open Society Institute, told The Independent, “As often as I’ve heard ISAF officials say they take accountability seriously, I’ve heard them describe commanders with serious credibility concerns as ‘Afghan good enough.’”

The ongoing calls from across Afghan society to end impunity show that keeping warlords being investigated for war crimes on the U.S. payroll is not “Afghan good enough.” Nor is it good enough for American taxpayers who are footing the bill.

And it is even more disheartening to note that unlike millions of those taxpayers trying to make ends meet in uncertain economic times, Commander Azizullah has found some job security in Afghanistan’s counterproductive “security racket.” Rather than weakening the Taliban, Azizullah’s exploits drive victimized villagers into the arms of the insurgency. As one interviewee from Pirkoti village in Paktika province told investigators, “Of course people turn towards the Taliban if he acts like this.”

This short-term strategy for stabilizing Afghanistan through the employ of local warlords has long-term consequences for Afghanistan’s security and the New York Times’ James Dao reports that it isn’t just confined to the restive south and east of the country.

In the northern province of Kunduz, Dao describes a program that pays village militias to shore up uncertain government forces in their fight against the Taliban. But the lines distinguishing the militias from the insurgency are far from clear.

“Many of the militias are controlled by strongmen who traffic in drugs and weapons and pay their soldiers by taxing the locals, as the Taliban do. Indeed, several militias in Kunduz fought alongside the Taliban before switching to the government’s side.”

And when the money stops flowing?

“‘If they do not have income, they will return to their old bosses,’ the mayor of Imam Sahib, Sufi Manaan, warned American officers in February. He should know. Some American commanders believe that he has links to a militia that fought against their soldiers last fall.”