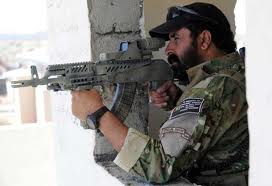 Earlier this year we reported on the case of Afghan National Police Commander Azizullah, a protégé of US Special Ops Forces and human rights offender, according to an internal UN report.

The reports detailed several instances of police brutality involving Azizullah, and questioned the reasoning for keeping him on the US payroll. NATO officials conducted an internal investigation and brushed off the allegations, so TIME’s Julius Cavendish looked into the case, conducting interviews with local sources to find out how the stories match up. The results of the investigation are disturbing.

Cavendish relays incidents of violence and abuse, including a rape, theft and the desecration of a mosque by Azizullah and his men, some 400 Afghan national security guards. What locals had to say matched up with the cases documented in an assessment by a reconstruction firm as well as the original UN report.

Abuse of power is all too common in Afghanistan, according to a recent study by the, and not enough is being done by the US and NATO allies to prevent it. It is even more unacceptable that these abuses are bankrolled by US taxpayers.

Continued support for Azizullah despite the evidence is further proof of short-sighted US policy in Afghanistan. Our leaders – both political and military – emphasize that the goal is to deny a safe haven to terrorists. In trying to accomplish that, we’ve empowered men like Azizullah, who have established a measure of stability, at the expense of human rights. We get a more-or-less reliable ally, and the Afghanis get a warlord in a police uniform.

This year we spent $11.6 billion training and equipping the Afghan National Army and Police. Some of that money went to Azizullah and others like him ( and there most certainly are others like him). The Afghan people deserve better than this, and so do we.