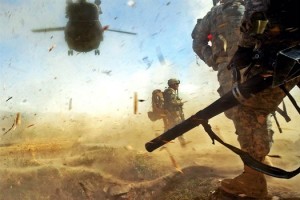 War costs will go down as we withdraw troops from Iraq and Afghanistan. But they won’t go down quickly.  A lot of our war expenditure is in support operations, not personnel. As a result, even factoring in the drawdown, we should expect to spend hundreds of billions on the wars over the next several years

Operations costs are not insignificant, particularly in remote and difficult environments like Iraq and Afghanistan. (In just one example the Department of Defense spends an estimated $20 billion per year on air conditioning in Iraq and Afghanistan).  Fuel is costly, as are base construction and maintenance. Then there are the substantial costs associated with decommissioning bases.

Ongoing costs include support for local security forces. Last year, however, the Afghan government was only able to contribute about 4% of of the $11.6 billion that the US invested in the Afghan security forces. So it seems likely that security assistance, as well as economic aid, will continue for some time.

The result is that the costs associated will not drop quickly, even as the drawdown progresses. We’ve seen this trend over the past several years, as operational costs have increased significantly from $507,000 per troop in fiscal year 2009 to $667,000 in 2010 and $694,000 in 2011, according to the Congressional Research Service.

Because of continuing costs not associated with personnel, war costs will continue even as the drawdown progresses The Center for a New American Security estimate is $7 billion in savings in Afghanistan war costs, assuming we go down to 85,000 troops over the next year.