Derrick Crowe, the Executive Director of Brave New World, wrote this week about the one-year anniversary of the Afghanistan surge that began with the offensive in Marjah. A quick survey of trends coming out of Afghanistan suggests that the new strategy is not looking so good.

With virtually every metric continuing a downward spiral after a full year, it is disheartening that the Obama administration has thus far refused to have an honest review of the strategy.

We put together a few charts of key measurements: fatalities, cost, and corruption to illustrate that it’s all going the wrong way. If last February marks the beginning of the “new strategy”, data for 2010 and 2011 represents post-surge. 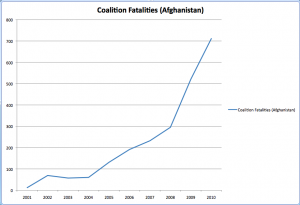 The cost to U.S. tax payers is now $119 billion a year and growing, having increased more than fivefold in the last five years alone. 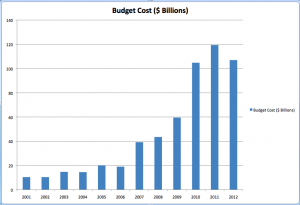 Source: CRS:  The Cost of Iraq, Afghanistan and other War’s on Terror[1]

“Government in a box” has been transformed into “corruption by the bucket-load,” exacerbated by a stolen election and a massive bank scandal that directly implicates several senior members of Karzai’s government. 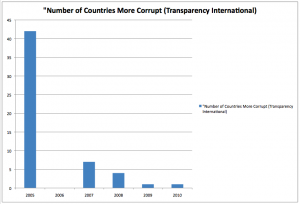